The Cooperative Association of Serbia with the support of the FAO-EBRD, the Government of the Republic of Serbia – The Cabinet of the Minister without a portfolio in charge of regional development and the work of public companies and associations of agricultural journalists AGROPRESS organized the National Conference on Co-operatives in the presence of numerous members and friends. On that occasion, the participants were able to get acquainted with the situation in cooperatives and the limiting factors for development, as well as the project “500 cooperatives in 500 villages”, support to the FAO and EBRD that recognized the cooperation of the cooperatives in the Republic of Serbia and the Cooperative Union of Serbia in the last three years intensely worked on the improvement of the work and business of the cooperative.

Over 300 co-workers, representatives of local self-governments, journalists, professors and business partners were present at the gathering, among them representatives of ZZ “Agrobobica” one of the most successful newly formed cooperatives on the territory of the Republic of Serbia.

Nikola Mihailovic, the president of the Co-operative Union of Serbia, emphasized that this year, very significant incentives were allocated, which through the project “500 cooperatives in 500 villages” are implemented by the Cabinet of the Minister without a portfolio in charge of regional development and the work of public companies Milan Krkobabic in cooperation with units of local self-government. The money is intended for the purchase of equipment and motherboards for cooperatives in order to enter the market with the final product, Mihailović explained, and reminded that the Government of Serbia allocated 825 million dinars this year to help improve the work of cooperatives. Also, he emphasized the commitment and assistance of the FAO-EBRD to the revival and promotion of agricultural cooperatives in the Republic of Serbia.

– The founders of the cooperative may also be legal persons;

– To enable the formation and operation of savings co-operatives, and;

What should start the activities in 2019. Year.

On behalf of Dr. Krkobabić, Dr. Siniša Perić, PhD in the Cabinet of the Minister without Portfolio in charge of regional development and work of public companies, spoke on the results of the implementation of the program for improvement of work in this and the previous year and announced that the program of support to cooperatives will be implemented in the next year .

State Secretary at the Ministry of Agriculture, Senad Mahmutović, pointed out that, through the Draft Law on Incentives for Agrarian, a legal basis was created for cooperatives to be beneficiaries of subsidies. The state-owned agricultural land should increasingly be treated as an instrument for development, said Mahmutović, adding that this is an opportunity for attracting investments, both domestic and foreign.

The gathering was welcomed by Knić Municipality’s Mayor Miroslav Nikolic, who pointed out the commitment of agricultural production for this municipality, and especially organized fruit and vegetable production for export.

In the course of 2018, complex cooperatives were formed, two of which were provided with incentives, the Governments of the Republic of Serbia, and on this occasion, the present participants were introduced to their programs that are in the function of creating the final product.

The President of the Association AGROPRESS Goran Đaković greeted the guests on behalf of the members and expressed his satisfaction that this year AGROPRESS is present at this event. 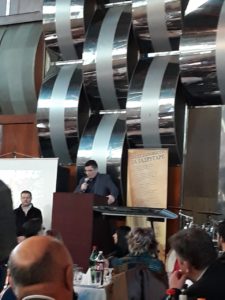